Can you identify the top 7 serious problems in this person’s work-from-home setup?  She can be guided to identify and correct them on her own, however, if they’re left as they are then she will most likely develop discomfort, quite possibly leading to pain and injury.  Yet, even with resolving the setup issues, her behavior (how she uses her furniture and equipment) will then determine her comfort or discomfort, fatigue rate, injury risk and productivity.

Moreover, research confirms how telecommuters who are experiencing discomfort or pain often don’t report ergonomic issues to their employer early.  Instead, many attempt to quietly resolve symptoms through their personal doctor and look towards their health insurance to cover the bill.  In the vast majority of cases, this develops into unnecessary over-utilization of healthcare resources while discomfort mushrooms into pain and a full-blown injury case.

These are some of the issues facing employers who are currently fine-tuning and reshaping “Return To Office” and “Hybrid Scheduling” plans.   Many are simultaneously undertaking critical projects to reduce significant risk exposures facing employees while working from home in order to protect their employees, their Employee Value Proposition and their bottom line.

New timely research was recently published, “Study Reveals The State of Home Offices in 2021“, which explores how more than 1,500 knowledge workers across the U.S. are “actually working” while working at home – after more than a year and a half of enduring the Pandemic.

Similar to other recent studies and articles, each reports another perspective of the growing number of people reporting discomfort and musculoskeletal injuries during the relatively short time they’ve been working remotely in their home-based offices.

As published in the report “Not everyone has the luxury of a dedicated home office, and even when they do, it often needs to be shared with partners and children. Seventy-one percent of the people we surveyed said they are “improvising” with respect to their workspace. One in three (32 percent) said they work from a proper office, but nearly as many (31 percent) say their bedroom is their office.“

“Not surprisingly—based on what we know from earlier in the survey—the bedroom is the number one place for people to take video calls (29 percent), followed closely by the home office (28 percent), and family or living room (27 percent).“

For all of the important reasons, we all want our employees to have a comfortable, positive, productive and safe experience while working on their computer whether it be in the office or home-office.

Mitigating ergonomic risks can be surprisingly straightforward using evidence-based science and methods, however, desired outcomes aren’t achieved unless the prescriptive guidance is forged into enduring improved behaviors.  It’s also clear from reading the articles that the doctors caution that duration is also a serious threat here where the duration they’re referring to is the time that the unhealthful behaviors are permitted to continue.

For the astute reader of similar recent articles, you’ve probably noticed how many include specific prescriptive guidance from orthopedic surgeons regarding how to stay out of their operating rooms:  (1) more movement and stretching is needed while working, (2) brief microbreaks are needed while working to adequately provide metabolic recovery time and (3) smarter positioning of furniture and equipment is useful to encourage hopeful neutral postures.

The three prescriptive elements all involve improved human behaviors which need to be developed while replacing prior unhealthy behaviors.

At many times throughout our lives, each of us encounter situations where we’ll greatly benefit from improving our behaviors.  Specifically regarding employees working on computers, we understand, guided by more than 40 years of evidence-based science, that to work comfortably, safely and most productively we need to conduct our behaviors in known healthful ways including:

Changing how people do something can appear simple on the surface.  So, why don’t we all simply, abruptly and forever change our behaviors after simply taking a course and being told to do something?  As you would expect, there are reasons.

In order to better frame the problem before attempting to finally solve it, one must become aware that practicing good ergonomic behaviors such as working in neutral postures, moving about periodically and providing recovery time while working are secondary behaviors which are far different than the primary behaviors of simply operating a computer.

Let’s consider your car and driving safety as an example.  The primary behavior required to operate your vehicle includes manipulating the accelerator, the brakes and the steering wheel.  Wearing your seat belt, however, is a secondary behavior which is not essential to performing the task of driving.

It’s the exact same in office ergonomics with computer use. The primary behavior is manipulating the computer to produce something, whatever that may be.  Secondary behaviors including utilizing neutral postures, moving about periodically and providing recovery time while working on the computer, however, are not essential to operating the computer, until you develop unnecessary discomfort and eventually a reportable injury.

In the case of secondary behaviors such as seat belt use in automobiles, in the distant past drivers learned seat belt safety behaviors from driver training courses and periodic reminders such as public service television commercials and print media notices.  It didn’t work and people were unnecessarily still getting injured where they wouldn’t otherwise be if they wore their seatbelts.

Taking a course, even with some number of periodic reminders in the mail afterwards had not changed people’s seat belt safety behaviors and so the problem had to be rethought.  Applied Behavioral Analysis was harnessed using Operant Conditioning (positive reinforcement) and point-of-use seat belt reminders were placed into automobiles.  They coached and reinforced the behavior of drivers to become an automatic behavior.

The result was a tremendous success which continues through this day.  People use their seat belts and their secondary driver safety behaviors have been successfully improved for the long-term.

Back to the realm of office ergonomics, how can you improve this secondary safety behavior of integrating neutral postures, moving about periodically, and pacing without a point-of-use operant conditioning positive reinforcement tool being used? 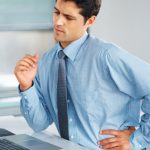 One fact gleaned from the evidence-based science over the past 40 years includes that “people working on computers who are not using neutral postures, not moving about periodically and not providing recovery time” are highly likely to develop discomfort and, left unmitigated, eventual reportable injuries.

Coaching: The Glue That Binds Knowledge Into Sustainable Behavior Change

Beyond evidence-based science, including Psychology and Applied Behavioral Analysis which both laud coaching, the benefits of having a coach are self-evident in all aspects of human behavior including, just a few as examples:

This unique intelligent personal coach is the glue that binds together the empowering value of office ergonomics as a sustainable solution.

It can be elegantly simple where you can be up and running, helping and protecting employees this week.

Imagine if you had a virtual extension of yourself who will personally visit with each and every employee today, teach them key actionable best practices of computer ergonomics, help them assess and tune-up their at-home work area and thereafter gently coach them to learn to automatically move about and stretch periodically while they work, without having to think about it.

This all starts with you and your vision to help employees work most comfortably, safely and productively.

This website uses cookies to improve your experience while you navigate through the website. Out of these cookies, the cookies that are categorized as necessary are stored on your browser as they are essential for the working of basic functionalities of the website. We also use third-party cookies that help us analyze and understand how you use this website. These cookies will be stored in your browser only with your consent. You also have the option to opt-out of these cookies. But opting out of some of these cookies may have an effect on your browsing experience.
Necessary Always Enabled
Necessary cookies are absolutely essential for the website to function properly. This category only includes cookies that ensures basic functionalities and security features of the website. These cookies do not store any personal information.
Non-necessary
Any cookies that may not be particularly necessary for the website to function and is used specifically to collect user personal data via analytics, ads, other embedded contents are termed as non-necessary cookies. It is mandatory to procure user consent prior to running these cookies on your website.
SAVE & ACCEPT